Does Gerrymandering Cause Polarization?

Corrections to the Hard Cover Edition of Polarized America 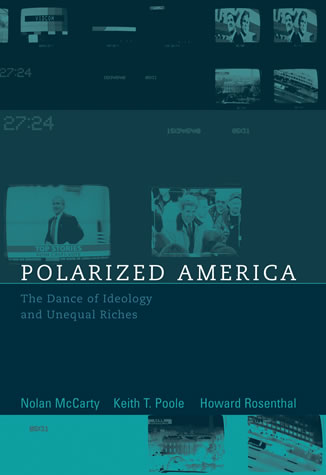 Polarized America: The Dance of Ideology and Unequal Riches

Political polarization, income inequality, and immigration have all increased dramatically in the United States over the past three decades. The increases have followed an equally dramatic decline in these three social indicators over the first seven decades of the twentieth century. The pattern in the social indicators has been matched by a pattern in public policies with regard to taxation of high incomes and estates and with regard to minimum wage policy. We seek to identify the forces that have led to this observation of a social turn about in American society, with a primary focus on political polarization.

Our primary evidence of political polarization comes from analysis of the voting patterns of members of the U.S. House of Representatives and Senate. Based on estimates of legislator ideal points (Poole and Rosenthal 1997 and McCarty, Poole, and Rosenthal 1997), we find that the average positions of Democratic and Republican legislators have diverged markedly since the mid-1970s. This increased polarization took place following a fifty-year blurring of partisan divisions. This turning point occurs almost exactly the same time that income inequality begins to grow after a long decline and the full effects of immigration policy liberalization are beginning to be felt.

It is more difficult to find the causes of polarization than to reject them because social, economic, and political phenomena are mutually causal. For example, immigration might lead to policies that increase economic inequality if immigrants are at the bottom of the income distribution and do not have the right to vote. We document an upward shift in the income distribution of voting citizens. In turn, dispersal in income might lead to polarization. It also might lead to laxity toward immigration if inexpensive immigrant labor in the form of domestic and service workers is a complement to the human capital of the wealthy.

In additional to our focus on the polarization of elected office-holders, we look at patterns of polarization among economic elites. By examining campaign contributions, we find very high levels of polarized giving. While some billionaires clearly spread their contributions to both parties to buy access, increasing numbers concentrate their largess on the ideological extremes. This polarized campaign giving, coupled with the emergence of the soft money loophole has arguably contributed to the ideological extremism of political parties and elected officials.

Finally, we also examine polarization among the electorate. While it is fairly clear that the views of most citizens have not become more extreme, those with strong partisan identifications have (DiMaggio, et al., Fiorina). Consistent with other findings (King, Jacobson), we find that partisans are more likely to apply ideological labels to themselves and a declining number of them call themselves moderate. Strong party identifiers are the most likely to define politics and ideological terms while the differences in the ideological self-placements of Republicans and Democrats have grown dramatically since the 1980s. Given Bartels’ findings that partisanship has become a better predict of vote choice, this polarization of partisans has contributed to much more ideological voting behavior.

We also find that the polarization of the electorate has increasingly taken place along economic or class lines. Unlike the patterns of the 1950s and 1960s, upper income citizens are more likely to identify with and vote for Republicans than are lower income voters. However, we find that class polarization is most likely a result of the ideological shift of the Republican Party towards a more economic libertarian position. This shift to the right was aided by a number of social, political, and economic factors. First, as American society has become wealthier on average, a larger segment of society prefers to self-insure rather than depend on government social programs. Such voters have become more attracted to the Republicans and their agenda for an “Ownership Society.” Second, due to patterns of immigration and incarceration, members of lower income groups are less likely to be part of the electorate. This has the effect of moving the median income voter closer to the mean income citizen, reducing the demand for redistribution (Romer, Meltzer and Richard). Third, middle-income voters in the so-called “Red states” increasingly sympathize with Republican positions on social, cultural, and religious issues (e.g. Franks). The Republican advantage on these issues has mitigated any loss of votes that might have been associated with their shift on economic issues. Finally, the emergence of a class-based, two-party system in the United States has benefited the Republicans and mirrored the patterns of economic polarization found in other regions.

Finally, we examine the policy consequences of the fall and rise of political polarization. The separation of powers makes it difficult to generate coalitions large enough to produce policy change even when opinion shifts. We exploit this observation to get some leverage in disentangling the effects of political, economic, and social policies. For much of the period when polarization fell, immigration policy was restrictive and unchanged while income and estate taxes, defined in nominal terms, became more onerous. For the period since the onset of renewed polarization, we find strong evidence that “gridlock” has resulted in a less activist federal government. The passage of new laws has been curtailed due to the increasing difficulty of generating the requisite bipartisan coalitions. The effects on social and tax policy have been especially dramatic as real minimum wages have fallen, welfare devolved to the states, and tax rates have diminished. We also show how polarized politics has affected administrative and judicial politics. 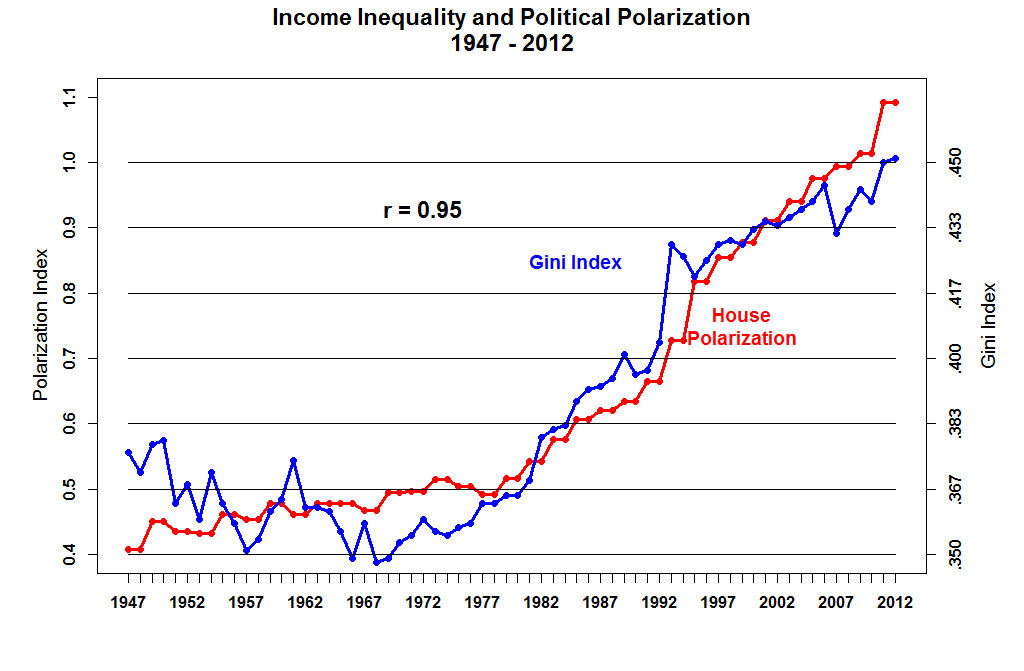 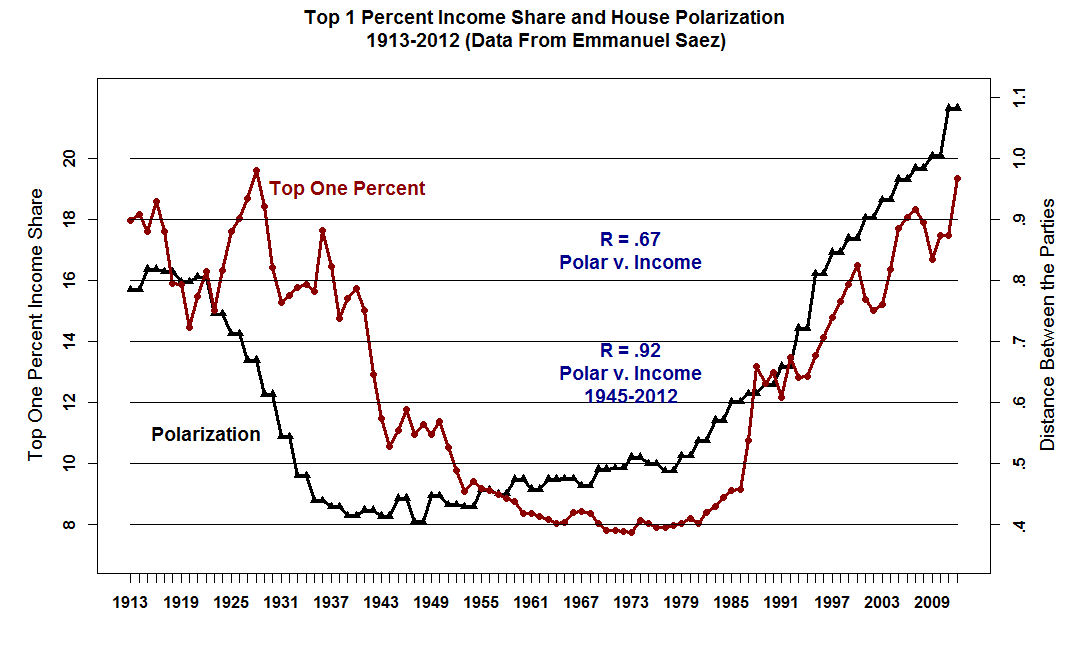 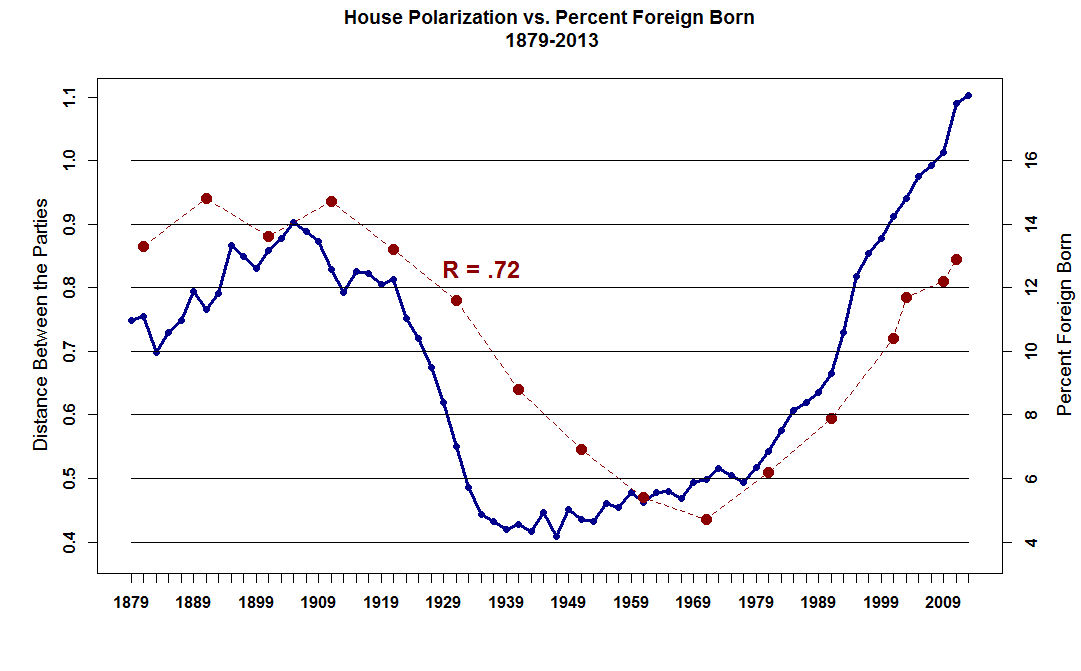 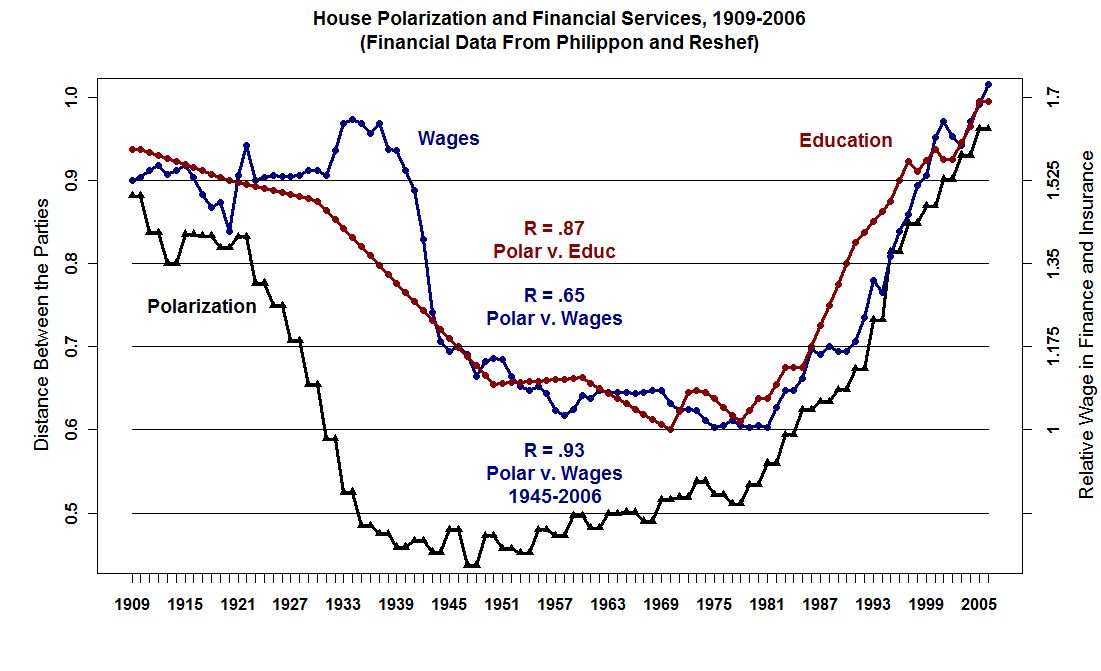 For further information about McCarty, Poole, and Rosenthal's work on Polarization see:

The Next Big Issue: Inequality in America, by Godfrey Hodgson

Interview of Nolan McCarty by The American Prospect

Growing Apart: The Mathematical Evidence for Congress' Growing Polarization, by Jordan Ellenberg
(Note that the links to voteview.uh.edu should be pooleandrosenthal.com. The pages are still on the website.)