Roll Call 347 took place on the evening of 21 September 2001, rejecting a motion submitted by Rep. Peter A. Defazio (D-OR) which would have recommitted the bill to the Committee on Transportation and Infrastructure with instructions to report the bill back to the House with amendments that required air carriers to provide health insurance for 18 months to laid-off employees and required the FAA to conduct security screening at airports. These amendments would have addressed numerous concerns brought up by Democrats during debate over H.R. 2926, the airline bailout bill.

I have grouped these individuals as follows:

Yea Nay - Liberal Democrats, who saw the bailout as wasteful or misengineered without appropriate worker protections.
Yea Yea - Moderate Democrats, who supported both the worker amendments and the general bill itself.
Nay Yea - Moderate Republicans, who opposed the amendments but supported the general bill.
Nay Nay - Economic Conservatives and Libertarians, who opposed both the amendment and the bailout bill. 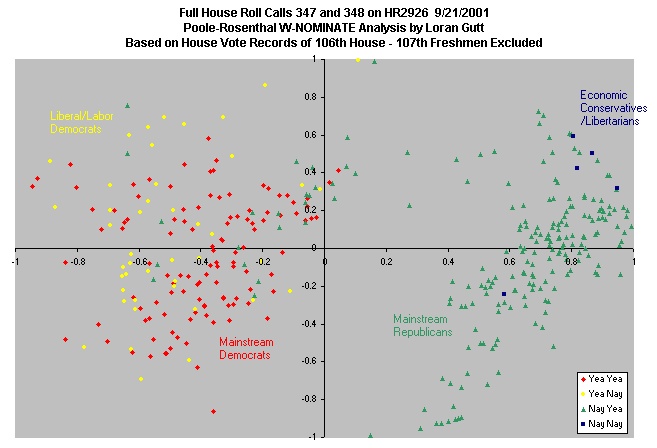 The most significant outliers seem to occur in the Nay-Yea category (generally left-leaning Democrats who voted in "the Republican way") and include California's Tauscher, Florida's Meek, Minnesota's Oberstar and Sabo, Pennsylvania's Kanjorski, and Texas' Frost, Bentsen, and Johnson.