This research was made possible by NSF Grant 0611880 to Jeffrey B. Lewis
Keith T. Poole, and Howard Rosenthal. This work was also supported in part by the Rice Terascale Cluster funded by NSF under Grant EIA-0216467, and a partnership between Rice University, Intel, and HP. We thank the National Science Foundation and the San Diego Supercomputer Center for their support.

In order to calculate distances from these Common Space DW-NOMINATE scores you must multiply the second dimension by the weight parameter. To calculate the choice probabilities you must apply both the second dimension weight and the Beta parameter. Use the Yea and Nay outcome coordinates with considerable caution because, as we explain in Congress: A Political Economic History of Roll Call Voting, they are poorly identified. However, the cutting line is identified and can be used safely.

Please note that these files contain scores for most Presidents. For Presidents prior to Eisenhower these are based on roll calls corresponding to Presidential requests. These roll calls were compiled by an NSF project headed by Elaine Swift ( Study No. 3371, Database of Congressional Historical Statistics, 1789-1989). Many of these scores are based upon a small number of roll calls so use them with caution!

In the files below the House Coordinates for each Congress are stacked on top of the Senate coordinates. If you have questions or need help with these files please send us e-mail at jblewis@ucla.edu (Jeff Lewis) or ktpoole@uga.edu (Keith Poole).

The Joint Scaling of the House and Senate utilizes the 2-dimensional constant model developed by Poole and Rosenthal in which each legislator has a single ideal point throughout his or her career. In contrast, the standard DW-NOMINATE scores use the 2-dimensional linear model in which a legislator is allowed to move on a straight line throughout his or her career. These models are discussed in detail in: In the table below we show the fit statistics for the Joint Scaling and the separate scalings for the House and Senate posted on the DW-NOMINATE Scores Page. The fit of the Joint Scaling is a half percentage point below the House fit but better than the Senate fit. This reflects the fact that the House fit is better than the Senate fit and the number of unique members in the House is more than five times the number of unique members of the Senate. Consequently, when the chambers are combined it is not surprising that the larger number of House members -- even with the constraint of the constant model -- will drive the fit. 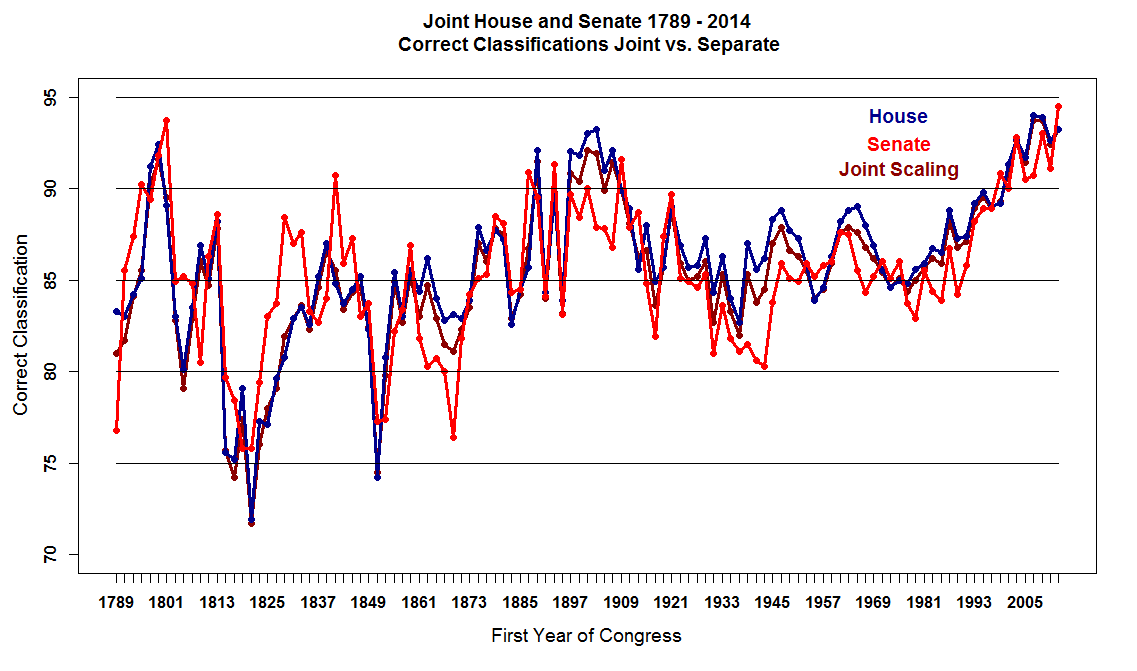 The graph below shows the Aggregate Proportional Reduction in Error (APRE). The APRE controls for the margins of the roll calls and is defined as (TOTAL MINORITY VOTES - CLASSIFICATION ERROR)/TOTAL MINORITY VOTES. Hence, if the spatial model simply predicts the majority number on each roll call the classification error will equal the total of the minority votes and APRE will be zero. This controls for the fact that if you have a large number of lopsided roll calls you can have a high rate of classification. The APRE statistic accounts for this by making the benchmark correctly classifying the minority votes (so to speak).

Note that since the 1970s APRE has climbed rapidly and is about 0.85 while the average majority margin on the roll calls in the two chambers has been between 70% to 65%. Most roll call votes in the current unidimensional era are all of one party plus the closest wing of the opposite party versus the remainder of the opposite party. This is why the APRE and the Correct Classification have risen so sharply. 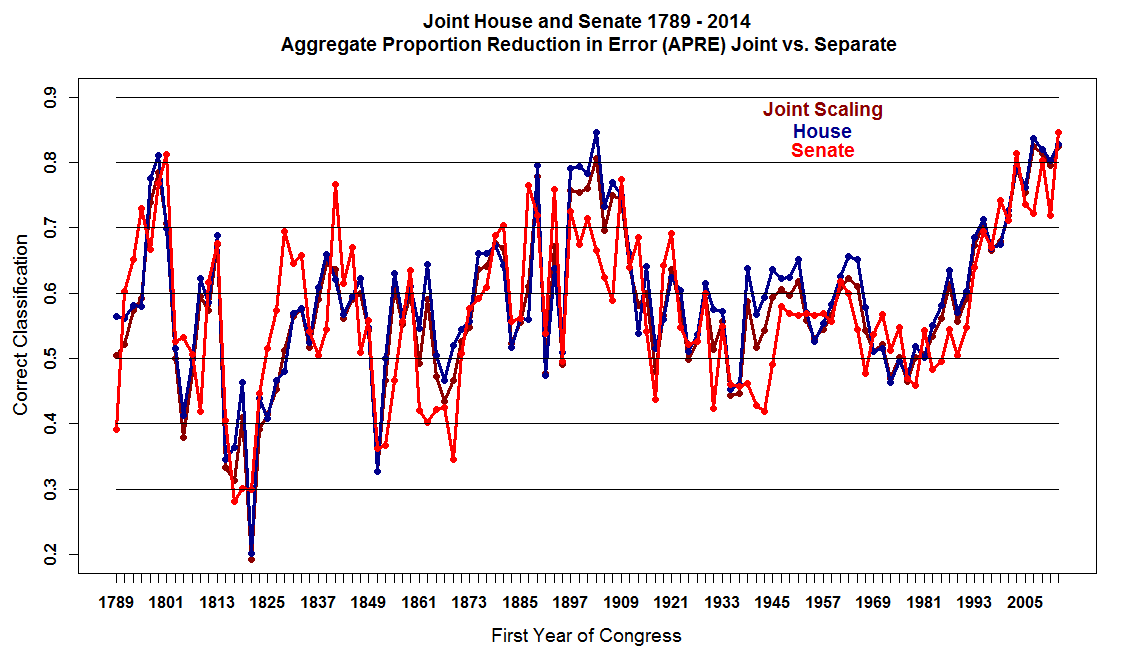 Below is a graph of the polarization of the House and Senate since the end of Reconstruction (1879-2014) using the joint space coordinates. Polarization is measured as the distance between the two major parties on the first, liberal-conservative dimension (see graph below). The pattern of polarization within the two chambers is almost the same with the 113th House being the most polarized chamber since the end of Reconstruction. 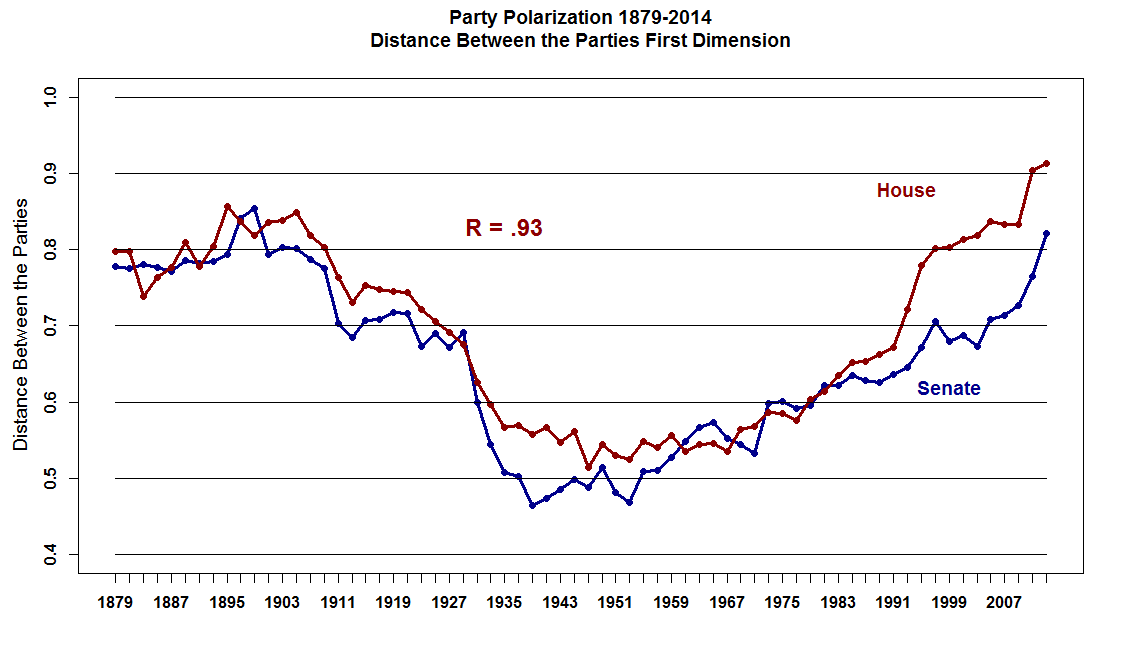 The three figures below show the Party Means for the current Post-Reconstruction Democrat-Republican two-party system. The figures pretty much speak for themselves. We have color coded the party lines and report correlations between the Party Means from the joint scaling versus the separate scalings. Note that for the graphs of the second dimension Party Means we separate out the Northern and Southern Democrats. The basic message of these graphs is that the Joint scaling is reproducing the Party trend lines during the whole Post-Reconstruction period. 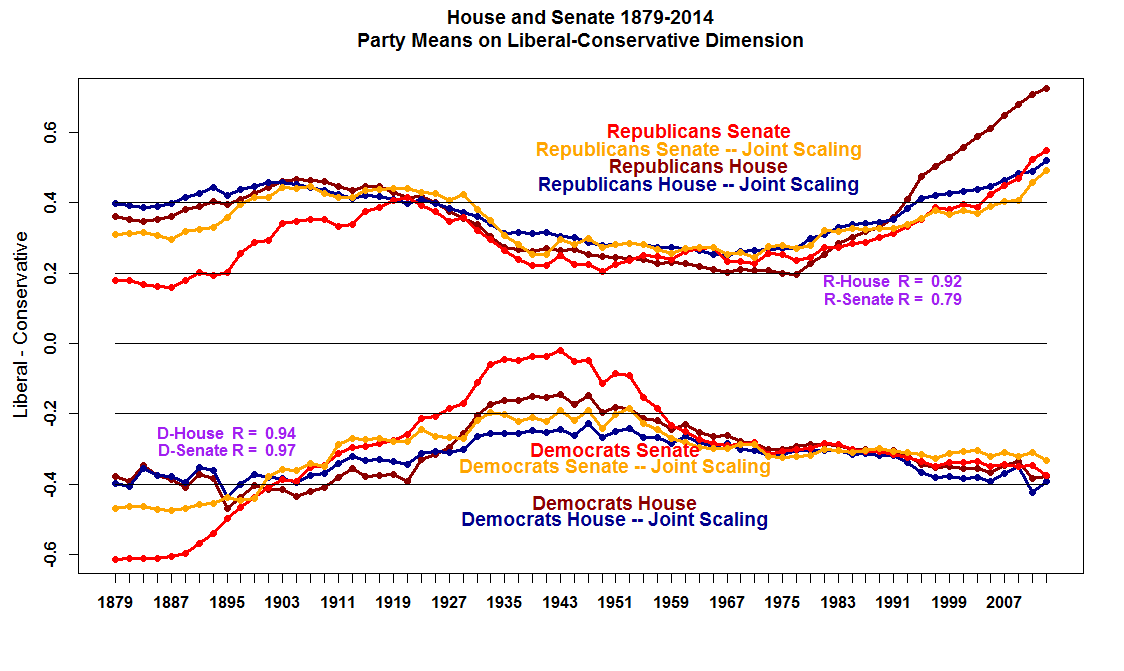 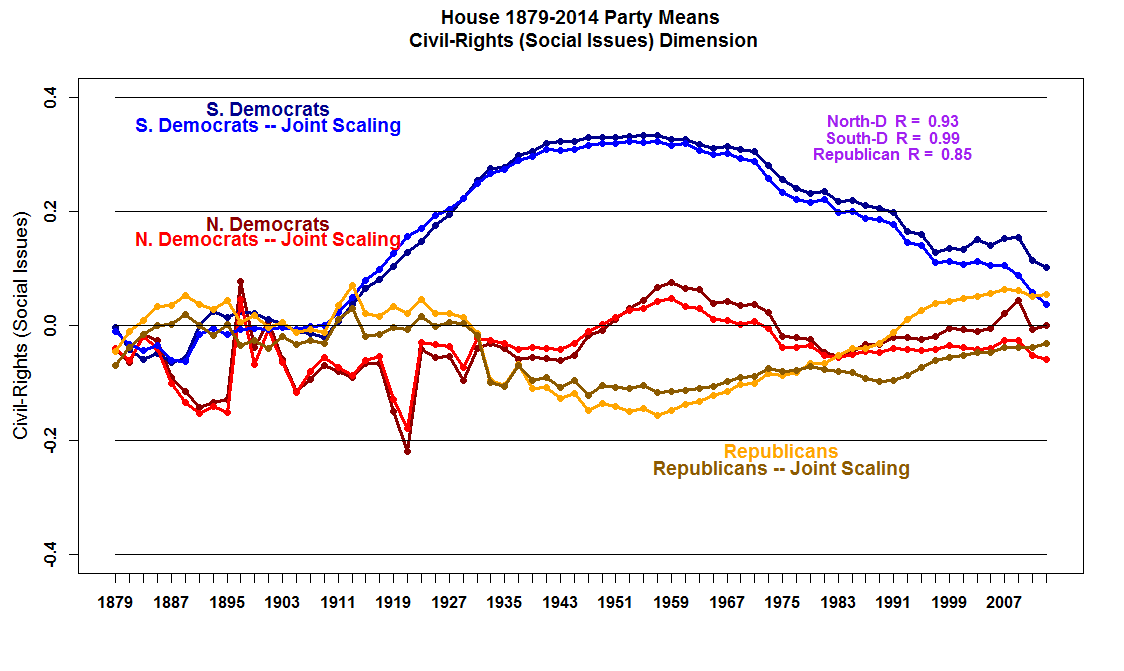 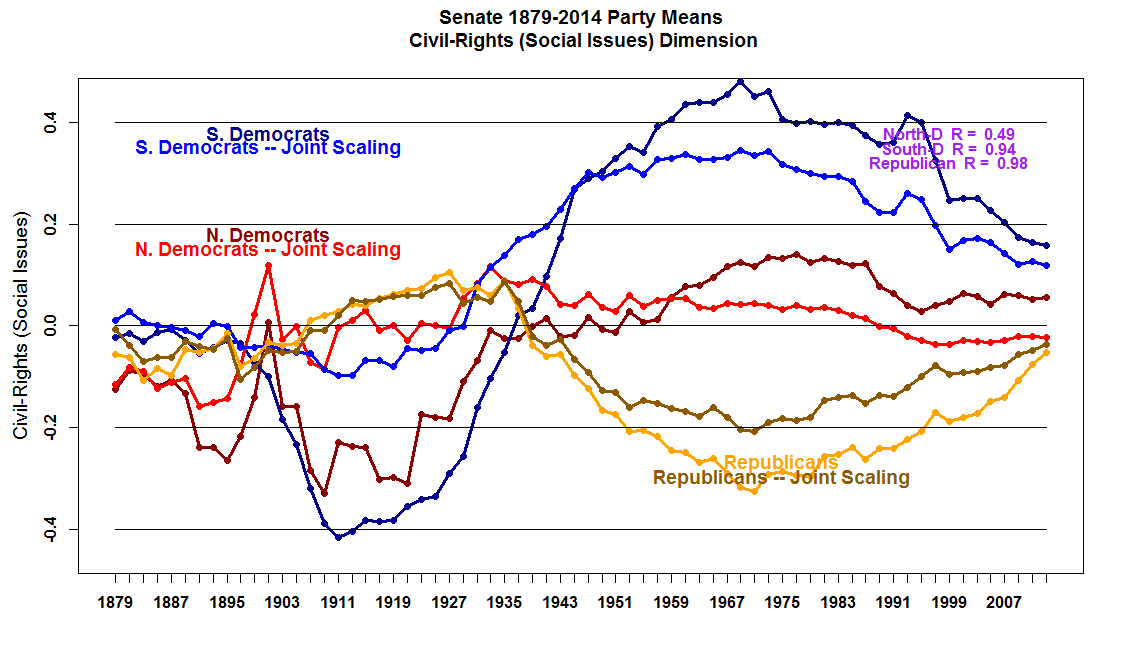